New to having a pet or just need more knowledge?

About heat cycles in cats:

All of the above terms are correct in describing female cats' periods of receptiveness to mating, but will be referred to as the more often-used "heat cycles." The breeding season in cats is practically year-round, running as early as February, and as late as December, but in the western hemisphere, March through September is generally regarded as the breeding season.

Rescue people dread "Kitten Season" because it means that in kill shelters, the new crop of kittens will eliminate any chances of adoption for older cats, including last year's kittens. If for no other reason, this alone is ample justification for the spaying and neutering of pet cats. Heat Cycles in Cats are referred to as "polyestrus," which means that they will go into heat cycles periodically during their fertile years. These heat cycles may start as early as the fourth or fifth month of a kitten's life, and will continue until she is either bred or spayed. Heat cycles in cats last from several days to two weeks or longer, and repeat every two to three weeks.

You can see then, how a female cat may almost always seem to be in heat. No one can say with any accuracy that heat cycles are painful to cats; however from the calling (loud yowling) and other symptoms they exhibit, it would appear that they are very uncomfortable. A kitten can have her first heat as early as 4 1/2 months, so don't fall for that old "wait until six months to spay" advice. And remember, that once a female cat has her first heat, it will happen again and again, until she either mates or is spayed. 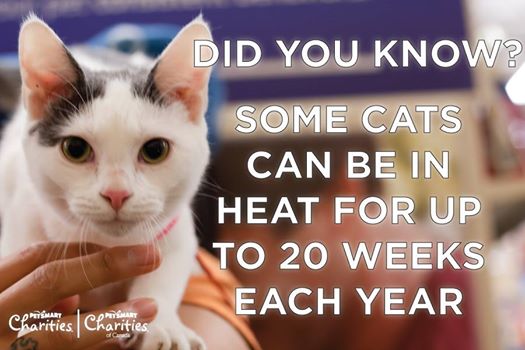 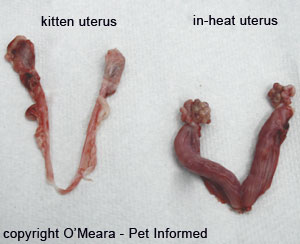 What about Dog heat cycles?

Non-spayed female dogs will go into "heat" or estrus usually twice a year. The age at which they start their cycles and the duration of the cycle varies greatly between the breeds of dogs and individual dogs. Learn more facts about canine estrus in this FAQ.

There are four stages to the canine estrus cycle:


So you could be facing up to 123 days of a TOTAL heat cycle, which breaks down to about 17.5 weeks!

Some general "rules of thumb" for canine estrus:

For dogs that will be pets, it is recommended to spay them before the first heat, eliminating the risk of accidental pregnancy and reproductive diseases later on in life. Dogs may be spayed while in heat (or pregnant), but there is additional risk due to the engorged vessels and tissue of the reproductive tract -- a higher chance of bleeding during surgery or other complications. The cost of surgery while in heat or pregnant is often higher as well.